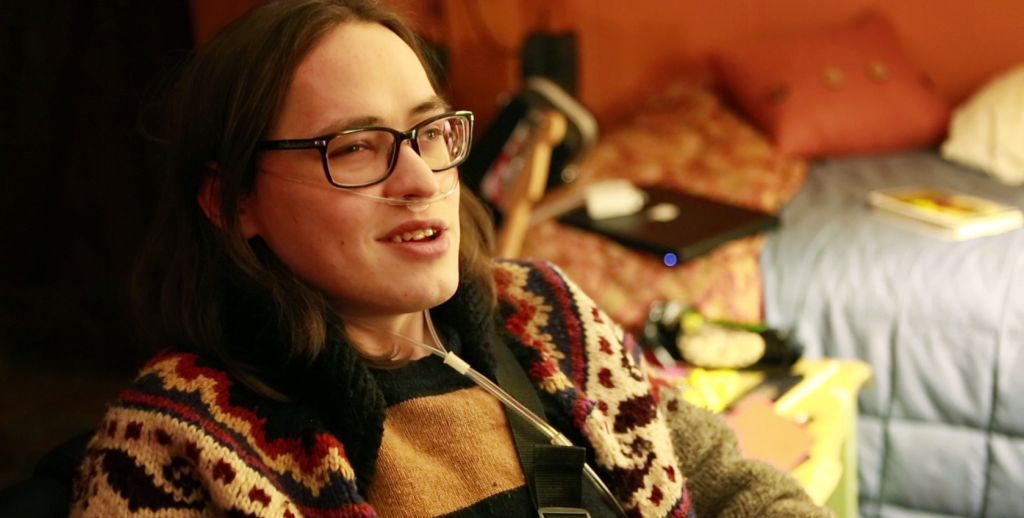 My film Exit Music was selected by IFP for Spotlight on Documentaries, a collection of 50 work in progress films that participate in the Project Forum during Independent Film Week. This was my big chance to escape my little grant-writing cave and make power moves in the big city, face to face with industry players. As a new filmmaker representing my first feature film, this opportunity was a solid immersion into the complex world of producing, financing, finishing, and distributing a film. The Project Forum provides a rare opportunity for independent filmmakers to sit down one on one with industry professionals and discuss a work-in-progress film and strategy for finishing it. It’s not set up like a formal pitch because the industry chooses which projects/filmmakers they want to meet with. 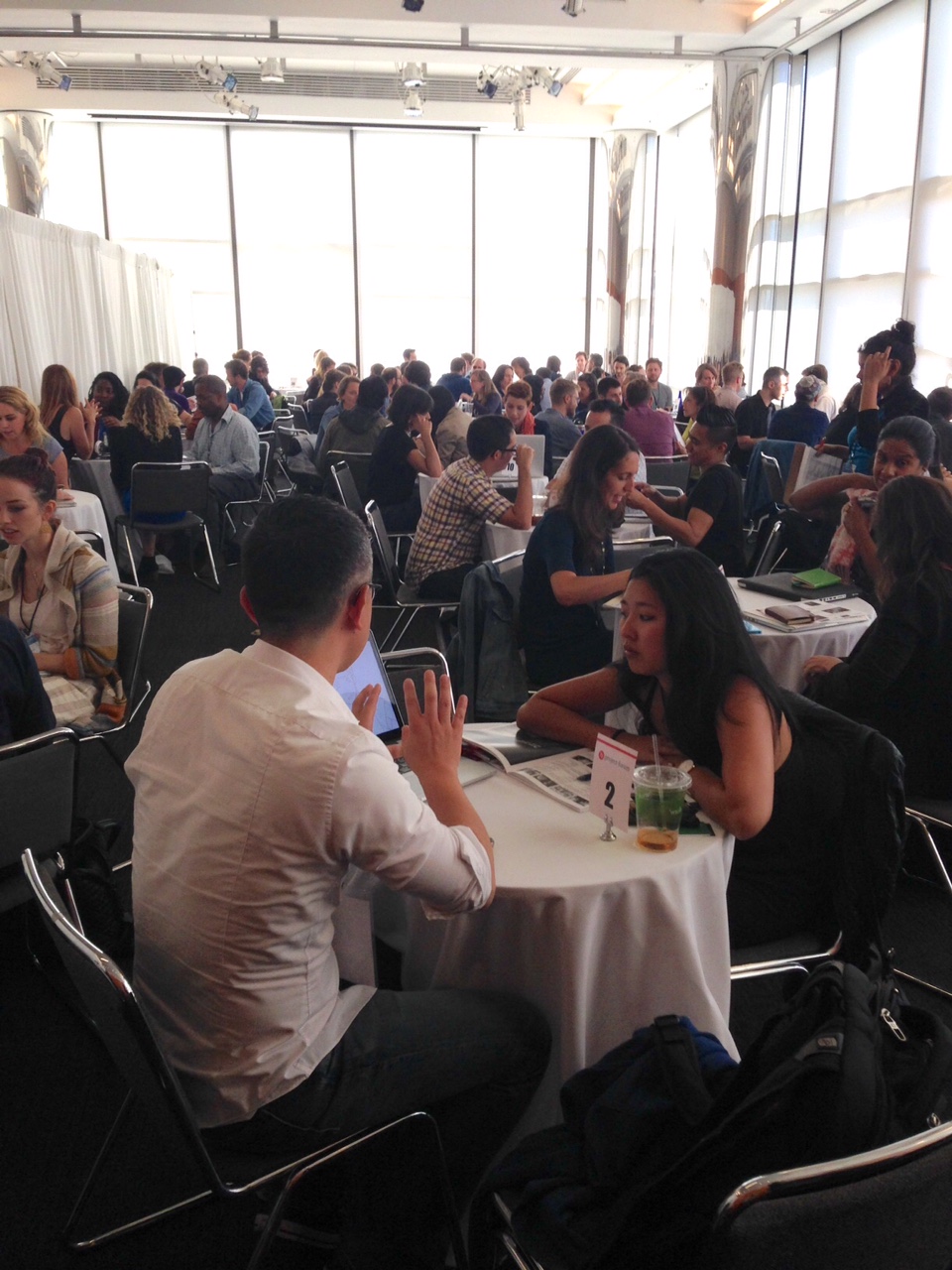 After getting accepted to the event, I provided IFP with succinct written materials about my film, a 20-minute preview, and a 5-minute teaser. Industry representatives can access these materials online and then decide who they want a meeting with. One week before the event, I was sent a final itinerary of my meetings. Over the course of 4 days I had 25 meetings with financers, broadcasters, sales agents, distributors, and programmers like ITVS, POV, Al Jazeera, Chicken and Egg, Cinereach, HBO, BRIT DOCS, Tugg, Gathr, Sundance, South by Southwest, Conde Naste, Preferred Content, and New York Times OpDocs, to name a few.

All the meetings took place in a huge room, speed-dating style. It was an exhilarating chance to practice pitching and get valuable feedback. Each conversation brought forth creative new ideas and important questions that helped hone in my pitch. I came into the event with the intention to make progress toward financing post-production. Overall enthusiasm for Exit Music was strong. But this is what I heard a lot. “When you have a rough cut please send it to me.” This is great news and I’m eager to share it with these inspiring, influential people, but after one year financing the film on my own, money to carry the project through a rough cut is crucial. This is the wild goose chase we independent filmmakers get to solve in unique ways on our own. Regardless, I was forming relationships with people that I can call upon in the future. 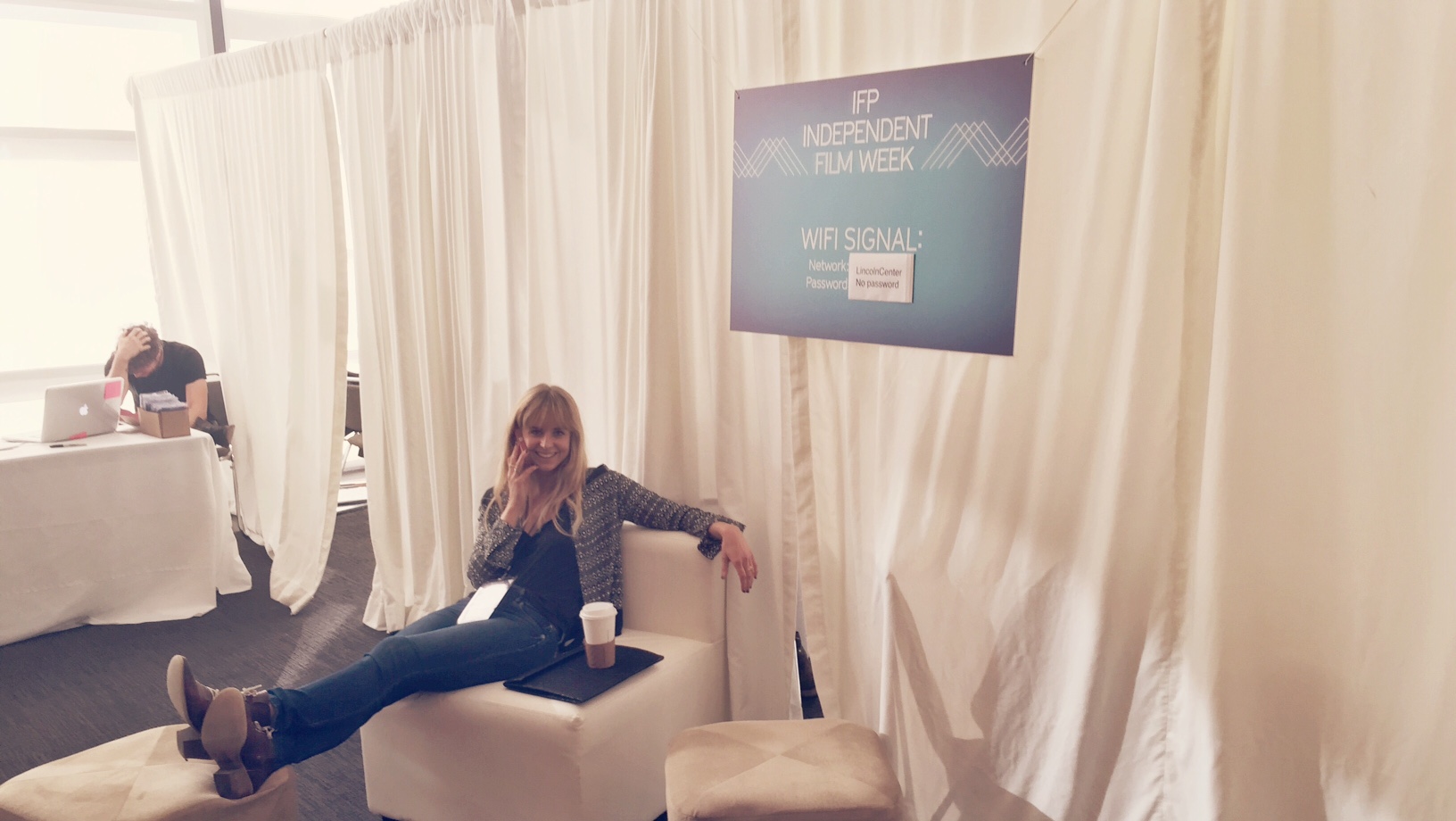 I admit I over-analyzed what clothing I would don on this very important threshold into adulthood as a filmmaker and printed way too many postcards I was often too shy to give out, because who actually saves them, but here are my takeaways:

Don’t over-prepare
Performing a canned pitch will cause people to lose focus. They are seeing countless projects and you have to stand out. As #1 expert in my story, I was confident in my ability to present it off the cuff. I approached it less as a formal pitch and more of an opportunity to have a meaningful conversation. I didn’t actually practice a pitch. I had talking points that I could improvise on depending on who I was meeting with and from what point of view they were seeing my film (i.e. distributor, sales agent, programmer, funder). Asking what sparked their interest in my film was often a good starting point. I think my conversational approach made more of an impression in the 30 minutes we had together. You’re not just selling your film. You’re selling yourself.

Passion is infectious
Everyone I spoke with remarked on my passion for the film. They wanted to know why I was the best person to make the film. My film is about one family’s encounter with terminal illness. Many people I met with commented on their own complicated experience with the death of a loved one. I wasn’t shy about my enthusiasm for the project and

Be clear and specific
Have a strong sense of your narrative arc and how the story will unfold on screen. Also, be clear about your timeline and budget. I actually printed a couple copies of my budget and it came in handy a time or two. I actually surprised some with how organized I was. 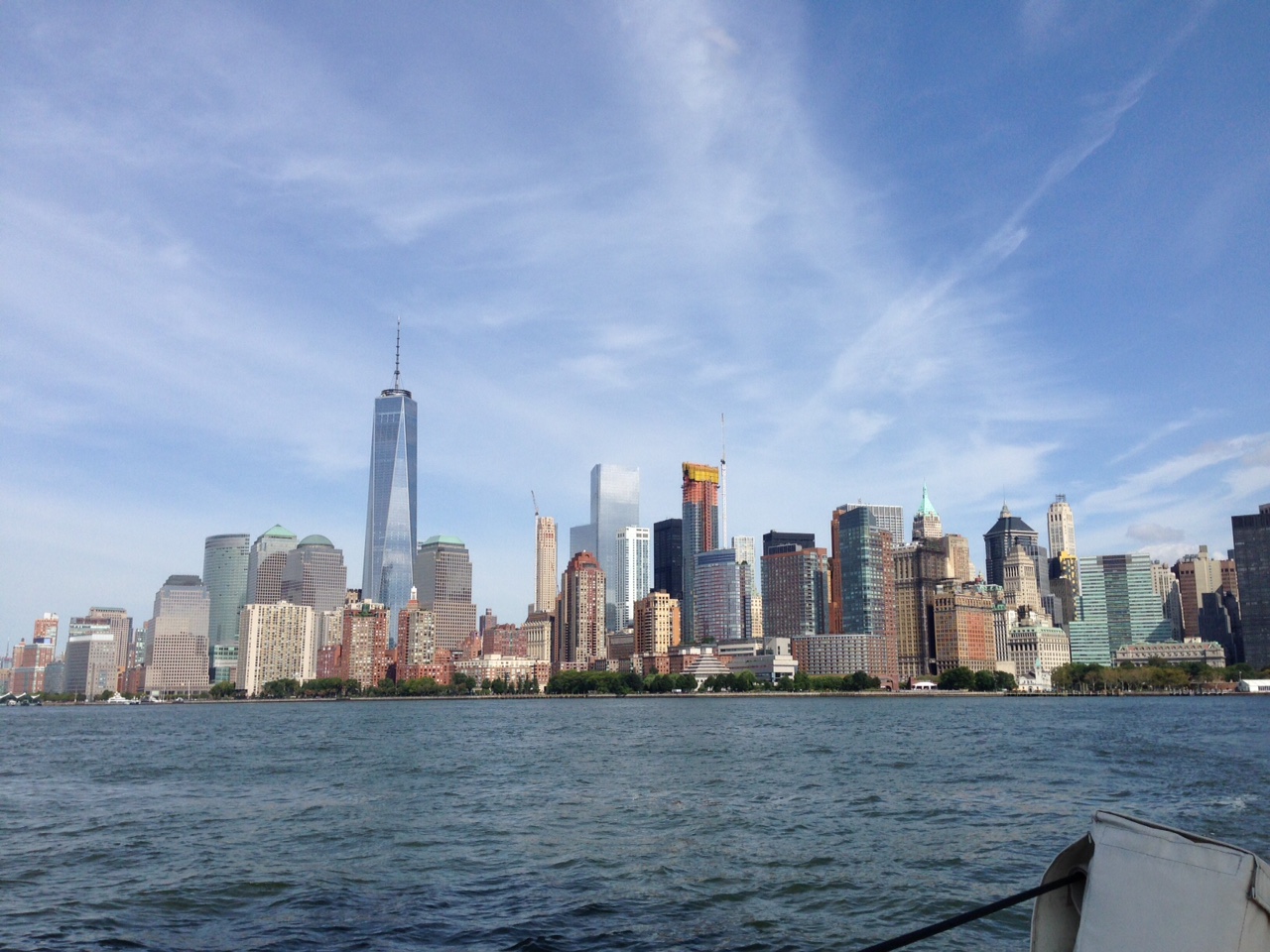 What are your outreach goals
Be a visionary. What is the best-case scenario. Really think about the impact of the film. Who is the audience? How will they be reached? Who could be partners to spread the message? How will you build a “movement” around the film? These are important questions to answer way before you’re done with the film.

Know what you’re asking for
I was there to find funding, an editor, and to establish relationships for future festival and distribution partners. Be clear on what you need to succeed.

Know who you’re talking to
I researched every person and company I was meeting with.

Everyone asked why I am making the film
Across the board, I was asked why I made this film and my personal connection to the story. It was an opportunity to speak a little about my journey as a filmmaker and how I was led into telling this story.

Ask for feedback
I had nothing to lose. Sometimes I asked at the end of the conversation for critical feedback or aspects of the project that gave them hesitation. This led to interesting conversations about how to set my film apart from others.

Ask for other connections
Many of my meetings led to other recommendations.  I came away with a list of organizations to research, movies to watch, and people to meet. And I made sure to follow through with everyone. 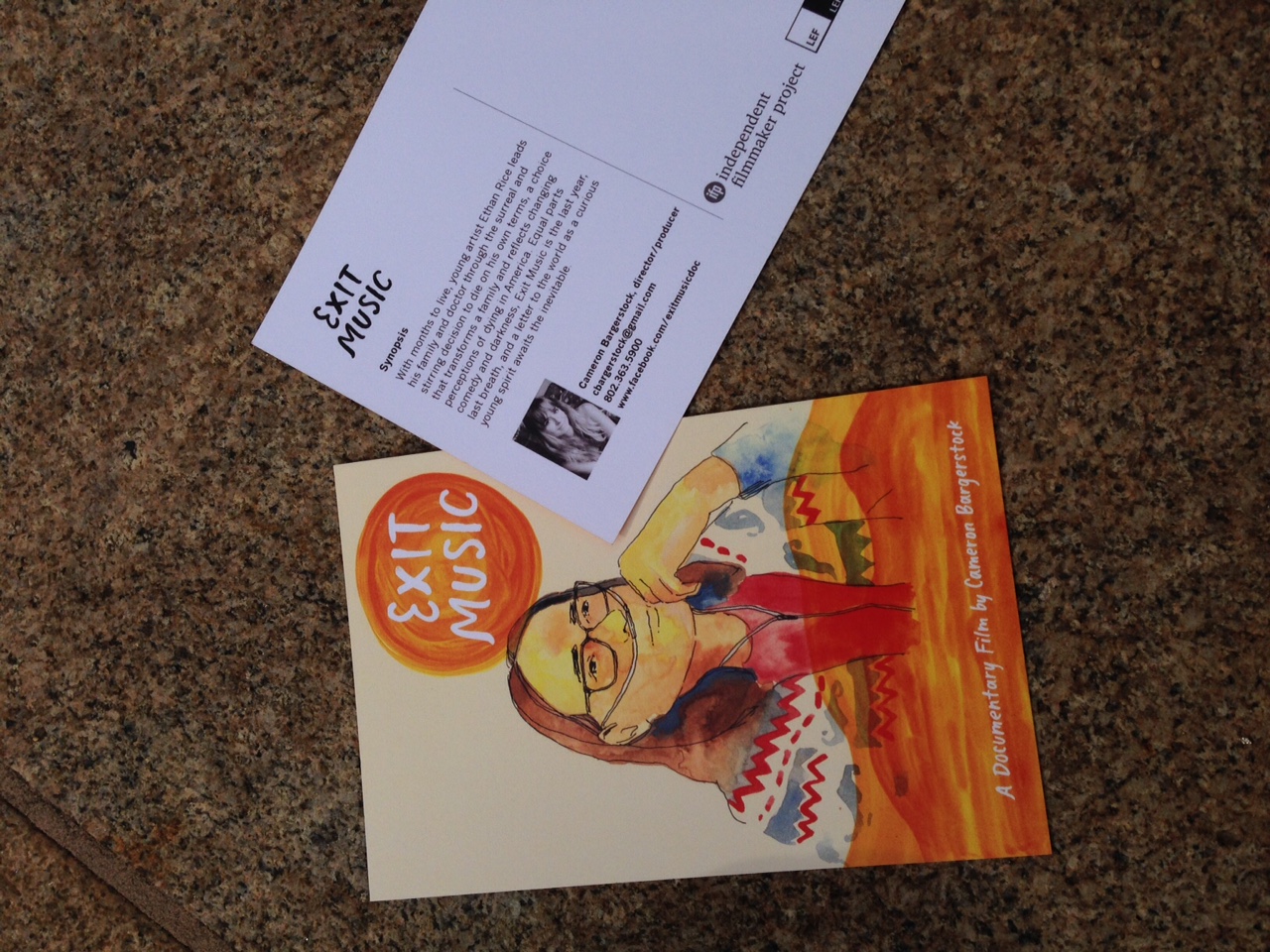 What to bring that’s actually useful
Business cards with your film’s title on it, nicely designed postcards, ipad with trailer ready to watch, and over the ear headphones.

Follow up
I reached back out to everyone that I met with. You never know how they can be useful contacts in the future or who they know.

I didn’t walk away with a fat check in hand to finish my film. But I made incredible connections with people that I hope will lead to collaborations in the near future. My favorite moments were bringing a major programmer to tears (in a positive heartfelt way), getting a second meeting with a potential financer, almost winning at bowling during an afterparty, and making friends with other filmmakers devoted to the craft of storytelling. 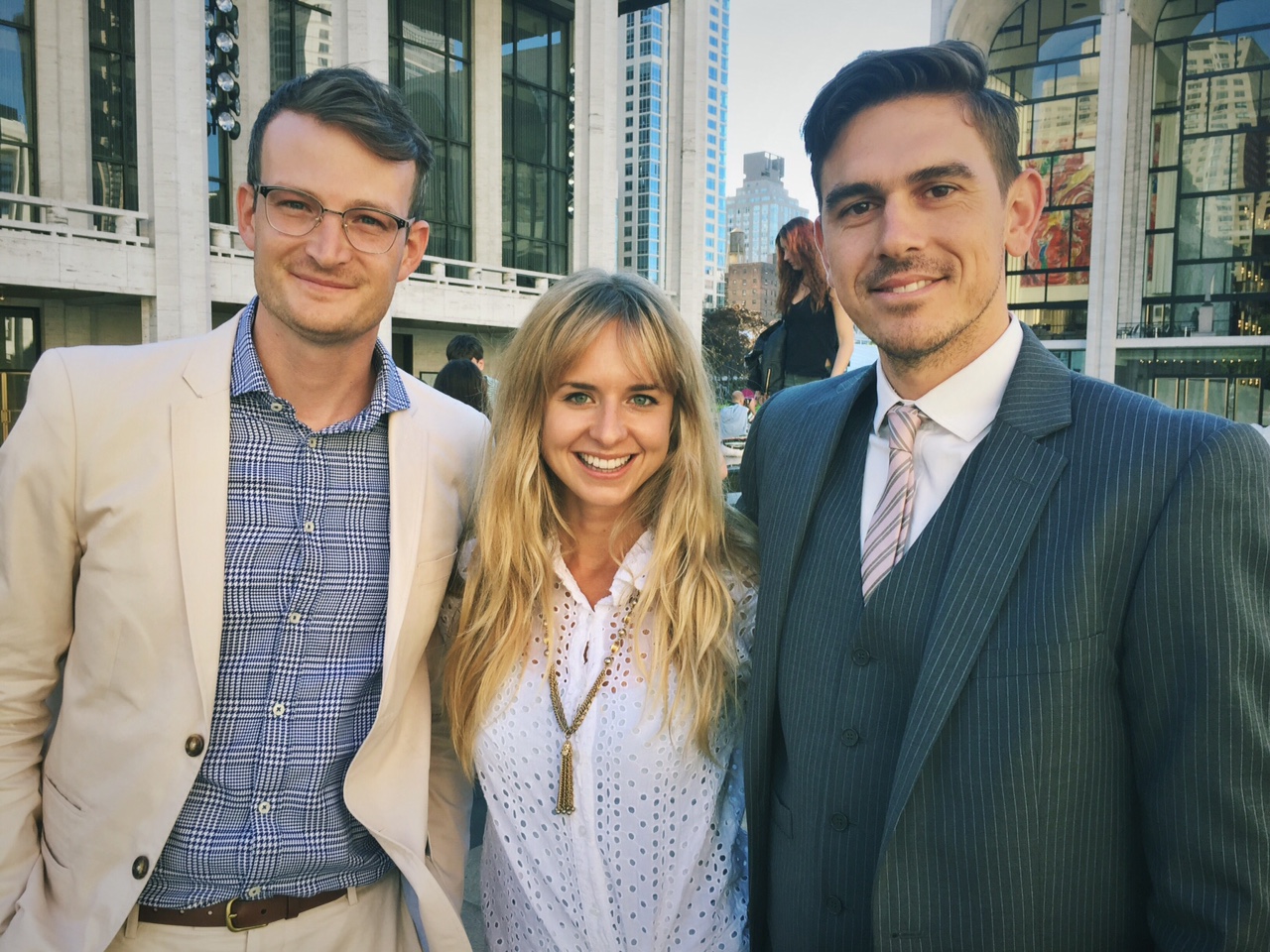 —
Cameron Bargerstock is the Director/Producer of EXIT MUSIC.
She can be reached at cbargerstock@gmail.com.
Learn more about EXIT MUSIC here.

Terminally ill at twenty-seven, offbeat artist Ethan Rice leads his family and doctor through the surreal and stirring decision to die on his own terms. Equal parts comedy and darkness, Exit Music is the last year, last breath, and a letter to the world as a curious young spirit awaits the inevitable and reflects changing perceptions of dying in America.

Captions (top to bottom): (1) A still image of EXIT MUSIC. (2) The Project Forum meeting room at Lincoln Center. (3) Chatting with my Executive Producer between meetings. (4) New York City skyline. (5) My film postcard (artwork by Mia Nolting). (6) Me with old friends Brian Morrow and Jonathan Lynch, the producers of Once I Was: The Hal Ashby Story.