Notes from the Flaherty Seminar 2016 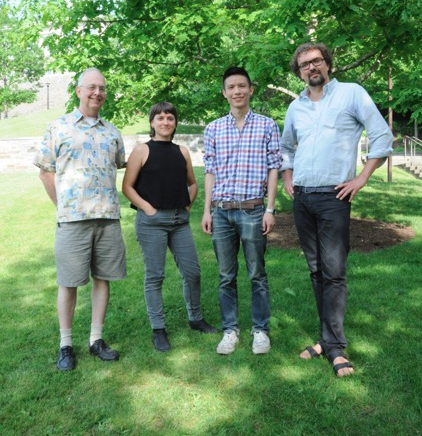 This week, we share some notes from Gerald Peary and Thorsten Trimpop.

Gerald Peary writes:
Thanks
to the LEF Foundation for getting me up to Colgate University. What has
taken me so long? I was by far the oldest of the 31 Flaherty Fellows
this year, and what we had in common was that we were all Flaherty
virgins. And thus, whatever our age, extremely vulnerable and raw,
almost like college freshmen. I thought before I went that, if I ate
well and got enough sleep, all should be OK. Wrong. I did eat well,
stuffing myself on not-so-bad cafeteria food; and I probably slept more
than anyone, getting back to my dorm room by 11:30 pm, when most were
off drinking and dancing.  Even so, I was broken down with exhaustion
each night after films starting at 9 AM and discussions ending at 11 pm.
Fourteen hours of watching movies, thinking about them, talking about
them. Insane!

And some of the time I was feeling anxious, frustrated, angry, bursting with unchecked emotions. What was my problem? Being so tired, I was driven around the bend by the more laborious discussions, in which various Flaherty participants stood up to speak. Their points were all over the place, often without point, often bogged down by the worst kind of impenetrable, pretentious grad school “theoryspeak.” And too much shrill political correctness. I craved an old-fashioned Q&A, where audience members ask short questions of the gathered filmmakers, and the filmmakers do the talking. My frustrations were shared by many others, who wished also that the Flaherty would alter its framework for group communication.

What was great about the Flaherty is all the private conversations you have with others like you, who are crazy about seeing and making documentaries. I can say I have a whole set of new friends in the documentary world whom I had never met before, including a delightful group of young filmmakers from Philadelphia and others from various Latin American countries.

The key each year to the Flaherty’s success is the choice of programmer, and this year the excellent person in charge was David Pendleton of the Harvard Film Archive. He picked far more experimental films than I would have preferred, but I felt fine with his program. He stretched me and challenged my aesthetic, all good things, and he brought with him a very interesting group of filmmakers from around the world to show their work. It was a great week to see documentaries set on the Azores Islands, in Colombia, Brazil, the Philippines, Germany, and the California desert. And thanks to David for celebrating a Boston cineaste who, forty-plus years into experimental films, still deserves far more recognition: the Mass College of Arts guru and local hero, Saul Levine.

“To see is to forget the name of the thing one sees.” This idea, frequently attributed to Paul Valéry, kept coming to mind during this year’s Flaherty, while watching film after film from the amazing program, Play, curated by the exceptionally gifted David Pendleton.

The amount of stimulation during this week is astonishing. Three full film programs a day, followed by discussions, collective meals, and conversations over drinks and dance. The next morning you return to the darkness of the cinema. Schweigend ins Gespräch vertieft (Deeply Absorbed in Silent Conversation) was, fittingly, one of the first films we saw during a master class with Ute Aurand. Shot in the early 80s in West Berlin, the film launched me on a kind of time travel. I’ve lived in Berlin for more then a decade—though almost twenty years after this film was made—and I saw in it a very familiar city, one I’m intimate with, that puts me in a mood for self-reflection. Ironically, Ute’s film happens to be about mirrors and reflections. The central character walks out of her front door and looks down at her reflection in a puddle on the street. Her gaze is constantly mirrored in her surroundings.

If truly seeing is forgetting the name of the thing one sees, to taste is to forget the name of thing one tastes, to smell is to forget the name of the thing one smells, and so forth —it is the process of forgetting not only the name but all categorical and assumptive thinking that enables us to experience the thing in itself. To sit in a dark cinema with 150 others, not knowing what we’ll see next, is to immerse oneself deeply into Flaherty’s idea of non-preconception. Kidlat Tahimik calls it Be. Here. Now. And thus I immersed myself in the different sensibilities of the filmmakers of this year’s program: The acerbic view of Luke Fowler, the never-resting eye of Saul Levine, the provocations of Luis Ospina, the kind wisdom of Kidlat Tahimik, and the soulfulness of Joaquim Pinto.

In Pinto’s Fish Tail, he arrives at a small fishing village at the Azores and captures the fascination he feels for this small community and the sea. There is a scene which will always stay with me: Rui, a farmer who becomes a fisherman after marrying and joining his father-in-law’s business, does not know how to swim. After several failures in his attempts to learn, Rui finally manages to overcome his fear of water and swim a reasonable distance without drowning. The respectful tenderness with which Joaquim Pinto and his partner Nuno Leonel captured this moment of tremendous drama is beyond words and something that can only exist in cinema. A swim in a pool becomes an Ulysses-like journey. The film is rooted in mutual curiosity and affection, and the result is a documentary as organic and transparent as the friendship from which it sprang.

After a couple of days of such immersion, real life began to blur. Each morning I woke in the midst of a vivid dream, my brain trying to digest it all. A film constructs its own universe of image and after-image and cannot be easily summarized as a chronological experience. I experienced this almost physically as the films occupied me and began to speak to one another. I remember the question we started with in the fellow’s orientation: What happens if you take play seriously? What does it mean to move from what if into what is?

In the end, the real power and quality of a film to me is in the way the filmmaker encounters a new place or way of being, bypassing clichés, moving beyond the surface to uproot the expected image so deeply buried in our unconsciousness. Cinema needs to create something new, not repeat the things we already know. To catch the truth of a moment: that’s the challenge.

I had the great pleasure to meet Billy Woodberry during the seminar and when I told him after seeing his LA rebellion classic, Bless their little hearts, for the very first time on a big screen, how wonderful it was. He looked at me and said: “The wonderful is in you.” And walked back inside the cinema.

The wonder is in us. We, as spectators and filmmakers, create the possibility of the pure, unmediated aesthetic experience we all seek, removed from theoretical or prejudicial frameworks. Cinema not only reflects life, life reflects cinema, and if we can experience something truly vital onscreen–“things you can’t erase from your soul anymore,” as one of the characters in Naomi Kawase’s film Sky, Wind, Fire, Water, Earth puts it–we can bring that deeper perception to our lives.