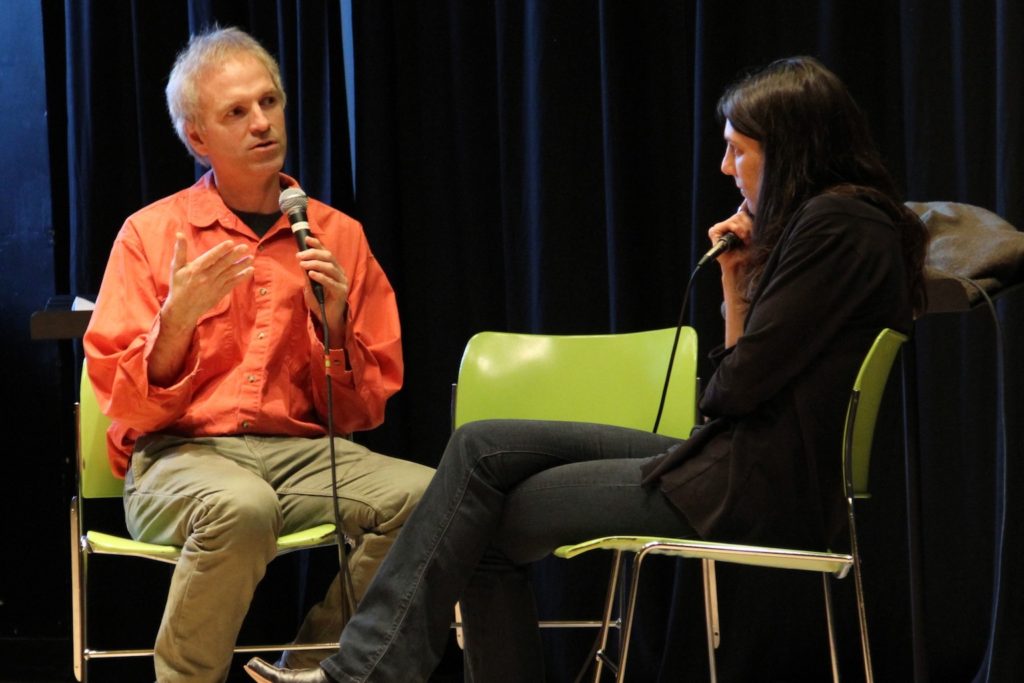 Since this dialogue was recorded, Robert Todd passed away in 2018.

Véréna Paravel is a filmmaker and anthropologist working at the Sensory Ethnography Lab and Film Study Center at Harvard University.  Her work is in the permanent collection of the Museum of Modern Art, New York, and explores evanescent forms of intimacy, mediation and space in a variety of media. Her films include Leviathan (with Lucien Castaing-Taylor, 2012), Foreign Parts (with J.P. Sniadecki, 2010), Interface Series (2009-10) and 7 Queens (2008).  Foreign Parts won seven international awards, including Best First Feature Award and Special Jury Award at the Locarno Film Festival (2010), and the Grand Prize at Punto de Vista (2011).  A New York Times Critics’ Pick, it was also an official selection of the New York Film Festival (2010) and the Viennale (2010). Leviathan is a critics’ favorite and has played around the world at festivals like Locarno, Toronto Int’l Film Festival, New York Film Festival, IDFA, and Berlinale. In 2013, Paravel and Castaing-Taylor were honored with the “True Vision” Award at the True/False Film Festival.

Robert Todd produces media work that resists categorization. In the past twenty years he has created a large body of short-to-medium length films that have been exhibited internationally at a wide variety of venues and festivals including the San Francisco, Rotterdam, New York Film, Black Maria Festivals, Nouveau Cinema in Montreal, the Harvard Film Archive, Pacific Film Archive, Slamdance, and more. His films have won numerous festival prizes, grants, and artist awards including, most recently the Brother Thomas Award through the Boston Foundation. Rob teaches video production at Emerson College.

Todd:  Well…you can see it’s not going to be a question about having sex with machines, but in a way it kind of is. I chose the introduction to the film because the poetics of the place and space seem to be driving this introduction and it’s the language that we speak when we walk into the film.

It’s very visceral, and I wonder if this contrasted with a more typical mode of going for prosaic content and the idea of a strict storyline. Could you talk about the construction of the film in terms of favoring the poetics of space?

The first shot of the film is actually the first time I discovered this place, so it’s literally my first encounter with the place.  I was walking with my camera, and I didn’t know about this place, and I turned and saw it and filmed it.  So this is actually very true, and the best way for starting the film, because it’s all about my encounter with this place, the very first time I walk in. I had the feeling I was walking into a cemetery, and at the same time, that I was walking in a cathedral, a museum –or a kind of feudal village with this stadium right next to it. I was walking in these multiple spaces, all very different, and I tried to make sense of this space.

I understood pretty soon that it was working as an ecosystem, literally a living organism where everything is connected to everything else. There were two hundred and fifty chop shops in Willets Point, with two thousand people working there, and we tried to understand how it works. The best way of doing this was just to spend time there, and we observed for two years.

It’s also a place that is very charged, in terms of history and the politics going on there.   It’s eminent domain and it’s a place that is going to disappear. So we wanted to create a balance, and not be too heavy handed with the political side, but rather give justice to this place and to the beauty of this place.   We tried to balance poetry and prose, and to capture both the beauty in this quarrel and also the violence and the tenderness of the place.  Did I answer your question?

Todd: Yeah!  There’s this really interesting intermixing of organic and inorganic in the film, especially in terms of the camera work, and the presence of actors–the subjects, so to speak–and the camera. And I experience all of these metaphors and parallels within the film related to this. Now that you’re seeing it again, are you more aware of those, or did you always know this mix of organic and machine was a big theme in the film?

Paravel:  Yes. One of the things we wanted to make visible was this whole machine versus human question.  By treating the car as a creature, of sorts, we were giving the same ontological weight to a car as creature, as we were to a human as creature.

Todd:  And then there’s you the filmmaker, as human; and the camera, as machine.

Paravel: So, you might think I’m a weirdo to choose the credits, but actually, I have a real fascination for credits. It’s absolutely not out of provocation that I chose them, I just think they’re super important and are this important moment of closure, of departure, from the film. I was really taken by the film, and I found these credits to be very moving and complex in a way that reflects the complexity and subtlety of your film.

I wanted to hear about the construction of the credits and the aesthetic, which includes these many layers. There is sound, and a name, and it’s like a litany; watching it, we know we’re going to survive these people.

Todd: The credits are, if you haven’t seen the movie, this moment that reveals that the people you see speaking are actors. I withheld that information during the course of the film and it’s revealed at the end that these are people reading written texts that death row inmates have given me.  First of all, my father was dying while I was making this movie and so he has a strong presence within it.  And the actors at one point, even have tubes in their noses, to suggest the power of listening to people who are dying, or are facing death.

One reason that I constructed it this way was so there would be a reveal of sorts. The other part was that (Death Row inmate) Marlon’s music, when I got it, was so moving to me.  It’s one of ten songs that he’d written while he was in prison and shared with his family.  He had come from a prison in Missouri that has a program where inmates are involved in speaking with victims of crimes. Typically the death row inmates aren’t confronting the family victims they were specifically associated with, but with people who had gone through a significant violent loss like this.  And so it’s a way of these people coming together.

I like the idea of the credits being a barrier between the body of a movie and this outré, this kind of strange place where all things are laid on the table.  And I also approached it this way, for black and white film is meant to put you in a different space than the rest of the film, which is in color for the most part.

People walk away from credits and are like, Can we please just move on…you know, when can I leave?  And to me that’s sort of a metaphor for other things in the lives that we lead.  Like, what can I ignore?  What parts are easily crossed out here?  These were some of the thoughts involved. And specifically with my father, there’s an undercurrent in this film of family footage, because I asked the inmates about their happiest memories and many of them are family oriented. These are questions that we ask ourselves infrequently, and they’re intimate questions we may be thinking about.  But when they’re given voice, there’s something very powerful about this. For me, Marlon’s final voice was a way of linking family and our larger, universal family. Is that okay? (laughter)

Todd: This is hard to watch this.  Marlon is now dead. He was killed. So, whenever I see this part of the movie, I feel a strange sense of guilt because I’m not involved directly in the movement (to abolish the death penalty throughout the U.S.), and I’m wondering when my next action can come forward and help these people. But in the meantime, they’re dying. Dennis is dead now, too. It’s a little much