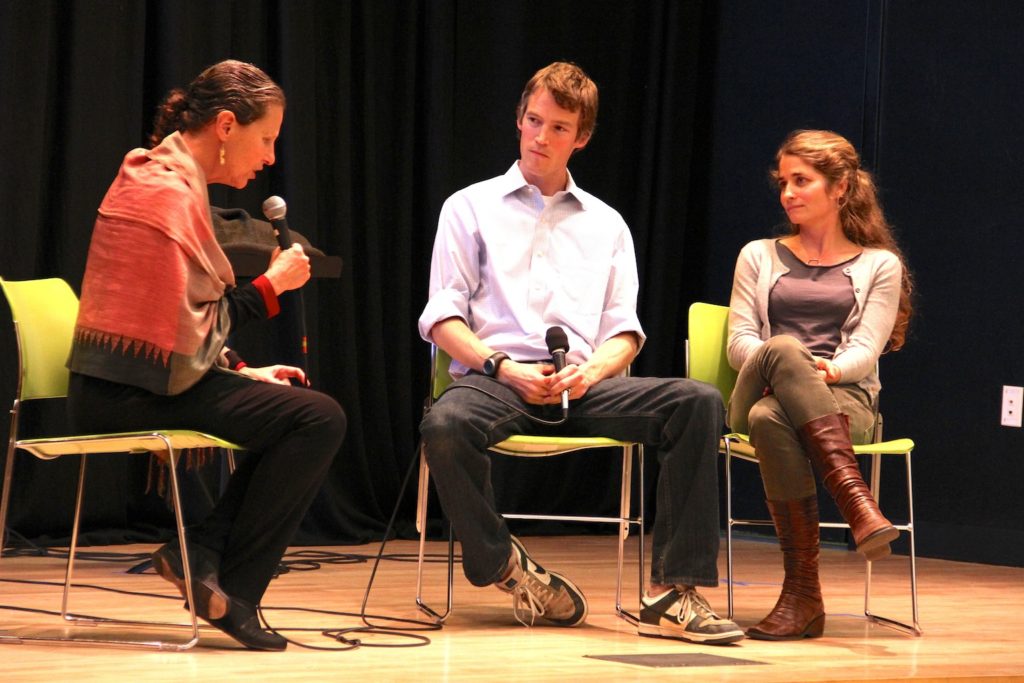 Michal Goldman’s documentaries look at how people define and express the urgent issues of their times through the way they live their lives. She is also a Jane of all Talents and produces, writes, and edits her films, which include: A Jumpin’ Night in the Garden of Eden, OOM Kul SOOM Umm Kulthum, A Voice Like Egypt; Epiphany in Progress, and At Home in Utopia. Her work has won the Academy Award and the Golden Plaque at the Chicago Film Festival. She was the recipient of the first Promoting Tolerance Award from the American-Arab Anti-Discrimination Committee. She is founder and President Emerita of Filmmakers Collaborative, and founder of the Boston Jewish Film Festival. She is currently working on a new film called Nasser.

Jason Mann is one of those filmmakers who can do any job you throw at him, much like many of the people in this room. He has worked as a cinematographer and editor on numerous documentary projects. He was director of photography and co-producer of Lost Souls (Animas Perdidas), which aired nationally on Independent Lens in 2010 and worked at Compass Light as an editor on the Discovery HD Theater series Sunrise Earth. He has also worked as a gaffer, dolly grip and key grip on film projects in Maine, Massachusetts and New York City.

Cecily Pingree is an independent filmmaker who began her film work with Big Mouth Productions as an assistant editor and production assistant on Arctic Son and Beyond the Steps: Alvin Ailey American Dance. She has worked on stories ranging from the controversy surrounding media consolidation, to rural health in Africa, to fishing and farming issues in Maine. She has worked on commissioned projects for clients such as The New York Times, Angela Adams Design and the Small Planet Institute. Cecily also makes time to teach video classes to youth.

Jason and Cecily started their production company, Pull-Start Pictures, in 2009 on a small island in Maine. Betting the Farm is their first feature documentary.

Goldman:  I actually watched this rough cut on Vimeo sitting in my workroom in Cairo, Egypt, where I’ve been for the past three or four months. So to watch farmers in Maine, while sitting in Cairo, Egypt was sort of amazingly, what’s the word, dyslexic…it was like my brain was trying to speak two languages at once.

There were very beautiful scenes in this film.  There was a scene of a calf being born. There are scenes that are quiet, where just work gets done and people pass each other and a farmer gives his wife a kiss. But I chose this scene partly because it had the most to do with my film, which is also about a cooperative that goes awry.  In fact yours is gonna be rescued.

But this was also the most emotionally complex scene, and I was very interested in how much you knew, and what you thought was going to happen, before you walked in. You must’ve known things were at a crisis point.   How did you prepare and then what kinds of adjustments did you have to make on the spot as you were filming?

Pingree:  Well, we were in a rough cut stage and had been editing for about six months. These ten farmers across Maine had banded together to start their own company, in order to save their livelihoods and continue to be dairy farmers.  Once a month they met in a boardroom, in what was visually a very boring space.  So it was difficult to shoot there; and unfortunately, it’s where a lot of the action would happen. We’d try to figure out how to shoot in this room where you couldn’t really even move around. The farmers were upset and there was a lot of drama because they were sacrificing a lot of money to get this off the ground. And then they weren’t getting paychecks.  So of course that adds to a lot of anger in the room, and Jason and I had do a fair amount of work to make sure we didn’t become an additional irritant, or nuisance.

Mann: I’d say yes, we knew things were not going particularly well.   And if anybody was going to get mad, it was going to be Mark or Richard.  We had just seen Richard blow up after a conference call, screaming and yelling he was going to “tear Bill end to end.” So it was actually kind of surprising when it was Mark. Except Mark is also one of those guys whose default level of anger is a lot higher than anybody else’s. I would say that we knew there was a chance people were going to be upset, but it was definitely a surprise when Mark walked out of the room.

Also, most of their business happens either in a boardroom or on a conference call once a week, so we would tape record their phone calls, which meant we usually had a lead on who was really upset, or who was gonna blow their top.

The consistent challenge for these guys in terms of working together as a group, is that dairy farmers are their own king, and any mistake they make, they have to own. They get to decide how to do things on a daily basis, and working together as a group of people and making decisions as a board, is foreign to them. It’s actually been really impressive to see people do that for the first time in difficult circumstances, where the money has stopped flowing.  It’s not the best time to try something new but they had no choice.

Goldman:  Did you think ahead of time about the style of your shooting, and if you were going to do certain kinds of close ups, or not; or going to film people in clusters, or you weren’t? How much was planned in advance, or did you just focus on trying to cover what was happening as best you could?

Pingree: As far as the board meetings went, again, this room was difficult to shoot in.  It was wherever I could settle in the room and stay put; and from there be able to get shots from that side of the room, and then move to another side. We’d been shooting this story for two years and been in that room 24 times, so slowly we were able to maneuver a little bit better.

This is Jason’s and my first feature, and we’ve certainly learned a lot.  I’ve learned the most about shooting in the edit room because there’s nothing worse than being, like, “Oh man, no cut-aways? Who shot this film?” (laughter)  And having to take the credit…

Goldman:  Does Jason work as an extra pair of eyes for you when you’re shooting together?

Pingree: He does do a lot of pointing and winking.   And Jason is my brother-in-law, so we do have this special language together.

Clip 2: from Steve Ascher and Jeanne Jordan's So Much So Fast

Mann: We picked this scene because both of us felt it was the most emotionally arresting part of the film.  The first part of my question is very simple and its what you just asked us, which is, “Did you know this story was coming at all?”  The second part is that the story that he tells — this simple idea that he met a beautiful girl and wanted to take her on a date, and he didn’t see any reason why he couldn’t do that – really isn’t simple at all.  Given society at that time, he’s confronted with a lot of reasons why he can’t do this (have an interracial relationship).

This feels like a microcosm for the whole story, which is there’s really no reason why we can’t organize our lives in a different way than the norm.   So I wondered whether you thought about this before asking the question, or during the editing, or did it just happen naturally?

Goldman:  Well, this is a film about two thousand left-wing people, many of whom were Communist and Jewish immigrants, who formed a cooperative and then a community.  And it wasn’t at all hermetically sealed, for they had a lot of connections to the Bronx around them. But still, there was a kind of culture that grew up in this place; and the people who I filmed, although they’re all very elderly now, were people who grew up in the Coops and were formed by it.

One of the main tenets of this place was a real commitment to racial justice and racial equality and this meant a kind of token integration in the Coops itself. So there were interracial relationships; this is not the only one, and I knew of many.

I do a lot of pre-interviewing, first, to learn about my story and second, to decide who to film. Boris Ourlicht, wasn’t someone I had thought about pre-interviewing but he called me up and was very angry and said, “You know, I should be in your film.  You don’t understand who I am.”  (laughter)   So I talked to him on the phone for a long time, which is the first way I interview people, and indeed… there was a lot he had to say.  He told me about his marriage to a black woman, and that she had died.  He was interesting for many reasons because he was an activist, and not necessarily a very thoughtful one, or introspective in any way, but a real weapon in left-wing politics.

I went to see him with my mini DV camera and filmed him, and subsequently talked to him as well. This was a man whose life story I felt I knew.  He had never told me this story in any of those conversations, and so we were filming and I asked him how he met Libby, thinking I was going to hear what I had already heard.

But there’s something about the heightened intensity — we had come into his house with lights, camera, and a crew — that evokes a kind of performance energy.  And that’s what happened with Boris.  He rose to the occasion in a way that there was a lot of trust between us.  He found himself — something I don’t think he was intending to do — he found himself telling us this story, and we found ourselves listening to it, for the first time, in an absolute hush.

In a kind of symbolic way, it represents the whole premise of the film, which is how these people proceeded in life from this unique place. I never understood this before!  You have given that to me for the first time.  I didn’t understand this moment as symptomatic of all the others, so thank you. (laughter)

Mann:  It was an accident, I assure you. (laughter)