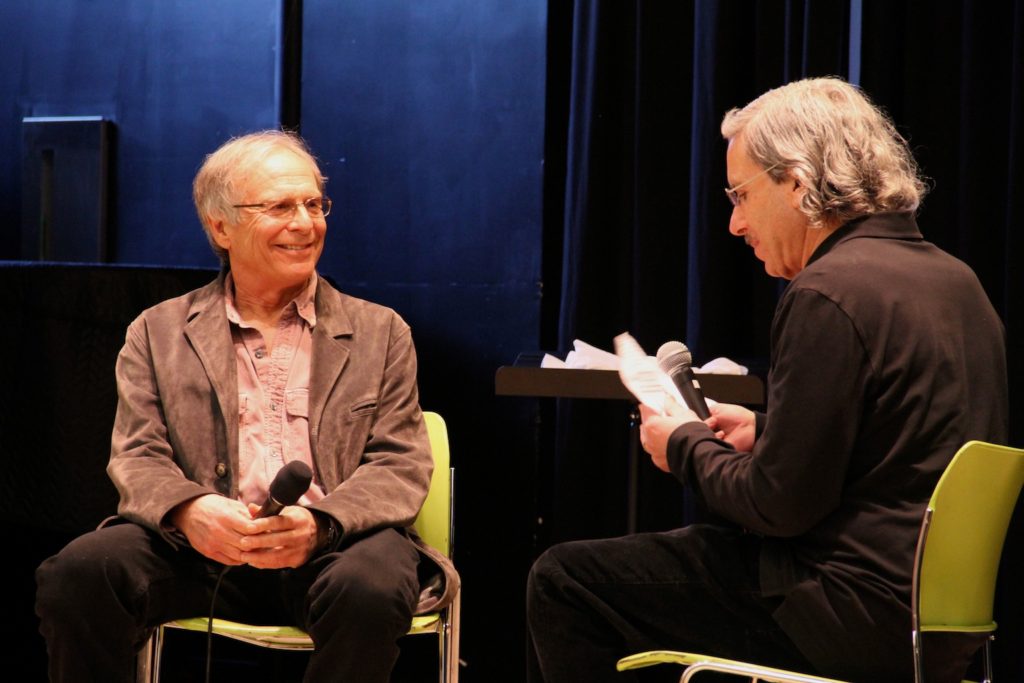 Since this dialogue was recorded, Ed Pincus passed away in 2013.

has established a reputation for intimate documentary portraits of unconventional subjects. David’s impressive body of work has almost entirely aired nationally on PBS and earned him over 100 international film and video awards. Among his many titles, he is probably best known for his films The Farmer’s Wife and Country Boys. The Harvard Film Archive honored David’s work with a ten-day retrospective of his films and, in 2007, The Museum of Modern Art (MoMA) honored him as the “featured director” at their annual Documentary Fortnight series. His current film Kind-Hearted Woman will be airing as a Frontline/PBS co-presentation in April 2013.

Ed Pincus began filmmaking in 1964, developing a direct cinema approach to social and political problems and events. He has credits as producer, director and DP on eight of his films and has been cinematographer on over twelve additional films. His projects include the seminal Diaries: 1971-1976 (1981), about the filmmaker’s marriage, family and friends; Black Natchez (1967), a one-hour documentary about a Southern town during the Civil Rights Movement; as well as Panola (1965, 1969), and One Step Away (1967). Ed started the Film Section at MIT where he taught for ten years and is the author of Guide to Filmmaking and co-author of Filmmaker’s Handbook.

Since this dialogue was recorded, Ed Pincus passed away in 2013.

Lucia Small joined forces with Ed Pincus in 2005 to form Pincus & Small Films. Their first collaborative effort was 2007’s The Axe in the Attic, and they are currently working on their next project The Elephant in the Room.

Pincus: The scene that we’ve chosen is an hour and a half into part two, of a three-part film. It’s a scene when Chris’s mother is chiding him for not having gotten out of bed in time for school. It includes a car chase scene with the two of them. It ends with voiceover and walking along the railroad track. In this scene, there’s an interesting use of sync-sound, voiceover, and interview to create an emotional power and rawness. In particular, the voiceover track has a special intimacy, almost as though the viewer is hearing thoughts in Chris’s head. In fact, the voiceover is one of the aspects of the film we found most compelling. When was it done in relationship to the scene and can you describe your process of creating the voiceover throughout the film?

Sutherland: I always try to interview my subjects as close to when something happens. After that particular scene, I interviewed him about a half hour later. I had to go and look for him, and I interviewed him in the van after I found him in town. So, it’s very fresh. It’s harder for me when it isn’t fresh because, as you know, occasionally in post-production you can do a re-record, or bring someone in and show them something, but they’re often in another head space.

I’ve changed approaches over my whole career. Early on, I would storyboard documentaries, and then I went the other way. I wanted to get as close up to my characters in vérité as I could. So, I started using more mics and sometimes I’ll shoot with three or four radio mics, sometimes five. I want you to feel like you’re living in their skin, going through it with them. Sometimes you can’t capture it well, even if you do hear them breathing and sighing, It can be easier, for example, in rural places because there isn’t as much interference, but then there’s the issue of bandwidths and all of that. Sometimes I’ll integrate narration in with it. The question I always ask myself when I do a scene close up is – and I tell my interns this –“You can use narration or you can use vérité. The question is what makes something imprint?” Sometimes something happens before your eyes and it makes an imprint. You’re done. And sometimes when editing a scene, you feel what still needs to be done. I have a lot of friends that are musicians. And I’m a terrible dancer. I can’t keep a beat. But I’m great at placing music. It’s always better when I trust what I feel and then intellectualize it, when making choices.

Things also change when you’re shooting. Like in this scene, I hadn’t put Chris’s mother on camera much. You get used to people being a certain way, but then you have to adapt. I showed up and could tell something was different with her.

She was all dressed up, and I’d never seen her like that in my life! (laughter in audience) So, I decided to interview her. I mean, I worked on that film for over seven years. And it changed my life for better and for much worse. (laughter in audience) But it’s the type of thing that I knew something was different.

If you hang around long enough, you watch characters gradually change. Sometimes they learn something, sometimes they don’t. But it was really quite shocking in this scene that his mother, who hid things, came right out in the open with everything, for whatever reason. You know, her husband was dying. He was a drunk. And she had a hard life; I’m not defending her, but no one’s ever all good or all bad.

Sometimes you’ll look at someone on the surface and say, “Oh my god, what a horrible person or whatever.” But there’s a lot of truth in everything around you and nothing is exactly what it seems. Sometimes the people who can’t read or write are the smartest ones in the room. But, I ramble…. When I pose my question about your film, I’m going to have to read it because it’ll take me five minutes to get it out. (laughter in audience)

Pincus: Let me add one more thing. As the film progresses, and we listen to Chris’s voice over, we come to realize that Chris is a bit of a sweet talker. As you know, voiceover has a certain authority; and one of the things I liked about your film is we have enough information to take everything with a grain of salt. If you see just this one scene, then the tendency is to take Chris literally. On the other hand, if you’ve watched him over the course of the film, you see his ability to sweet talk himself and people in authority around him.

Sutherland: Chis also has an uncanny ability to mimic. I lost a two hundred dollar bet with him once. We were in the editing room and I said his father had said something, and it turned out it was Chris. (laughter) His father speaks, as you know, beautifully; he’s very articulate. When he’s with his father, Chris quite naturally mimics his father’s voice. He’s like a parrot. In the scene that you chose, it probably all happened within about ten minutes. Not everything’s like that, but with that particular scene, god, I don’t think I had much footage. And in other places, I’ve got tons of footage, you know, and nothing’s there. (laugher) But, anyhow, I like your choice. I haven’t seen that scene in a long time

Clip 2: From Ed Pincus & Lucia Small's The Axe in the Attic

Sutherland: Well, given your decision to put yourselves in the film and the fact that you show yourselves being challenged by your subjects sometimes, and sometimes being challenged by each other, what do you think the film gains and loses by doing this? And I want to say that personally I thoroughly enjoyed your doing this and liked the film very much. At one time I lived in Louisiana along with my closest friends from college. I’ve seen a lot of films about Katrina, and I also went down there. I wasn’t looking forward to seeing this film, but I liked it very much (laughter)

Pincus: What interested us, and bothered us, as filmmakers making a social issue documentary, is the ability of both the filmmaker and the audience to take the moral high ground by knowing what is right and wrong. Filmmakers themselves come with a lot of baggage, and there are always a lot of arguments in the field. We wanted to take this baggage and unpack it; to look at the nature of “doing the right thing” when it comes to filmmaking.

The idea of the film was to look at the Katrina diaspora, to see what happened to the people who were scattered around the United States by the hurricane. And to see the impact as they tried to recreate new lives in a different place, however temporary. We also decided to film everything that happened to us as filmmakers. Part of the underlying reason for this– or at least my underlying motivation – is that you, and the audience, find out more about the subject, and how that subject was filmed, if you know the limitations and the possibilities of the filmmaker.

Sutherland: I thought there were several places where confrontations between filmmaker and subject happened. There’ a great scene with a husband, and his ex-wife, who’s living in a tent separate from him. They fight about their relationship on camera, and then turn and ask the confrontational question, “Are you both sleeping together?” (laughter) It’s a great scene, with lots of humor. What I’m trying to say for anyone who hasn’t seen the film, is that when you decided to do this, you definitely did it, whether it was embarrassing or not. I could never do this, so it’s totally foreign to my nature. But the way it was edited and put together, I thought it worked extremely well.

Pincus: Lucia and I feel that being a filmmaker is a very privileged position. You have a voice; your subjects don’t. Lucia primarily did sound and she has a very engaging personality. She wouldn’t interview people, but create conversations with them instead, which was totally new to me. I’m from the tradition of fly-on-the-wall filmmaker. Part of the humor comes out of this give and take between filmmaker and subject — and it’s meant to have a lot of laughs. But also, by asking people difficult questions, people could confront us with difficult questions.It’s a way to say, we’re no different than you. We might not be under the same pressure you are, but we’re also vulnerable.

Sutherland: You definitely do this – and also explore the ethical dilemmas involved in filmmaking.