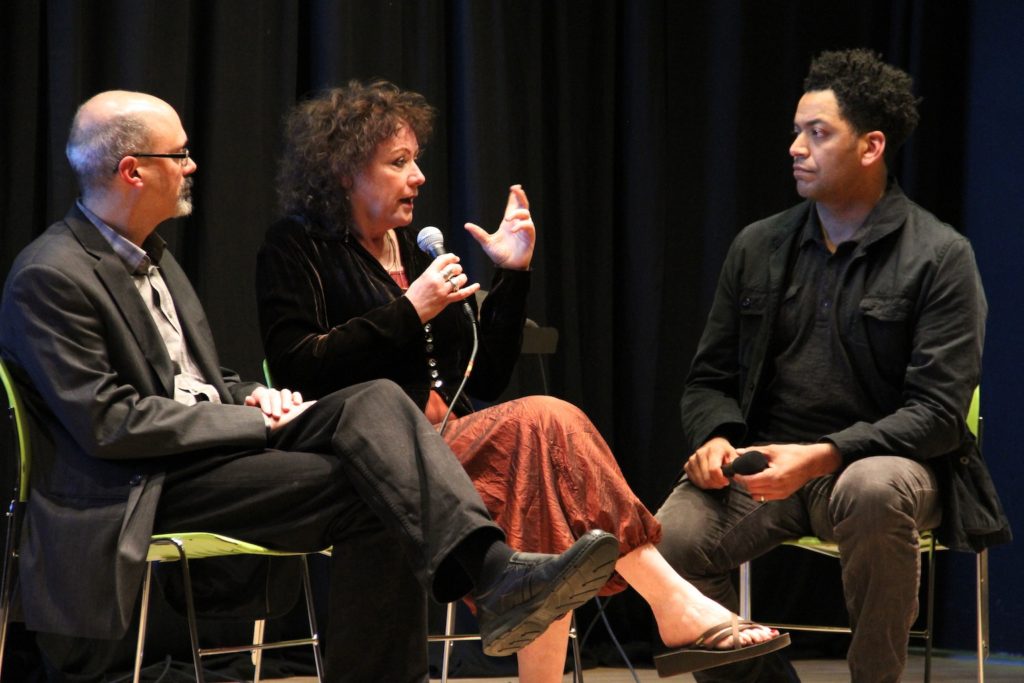 Chico Colvard is a Lecturer and Film Series Curator at the University of Massachusetts, Boston. His award-winning documentary, Family Affair, premiered at Sundance and has broadcast on OWN and other networks around the world. He is a Sundance Creative Producing Fellow and Filmmaker-in-Residence at WGBH. He is a frequent speaker at colleges, film festival panelist and former juror at Full Frame, Silverdocs and IFFBoston. His new film, Black Memorabilia, examines the subculture around the collectibles and antiques that serve as reminders of America’s troubled racial past and present.

Steven Ascher and Jeanne Jordan are Oscar-nominated filmmakers who have been making documentary and fiction films for many years. Their feature documentaries include Troublesome Creek, which won the Grand Jury Prize and Audience Award at Sundance, the Prix Italia and the Peabody award. So Much/So Fast premiered at Sundance, was released theatrically to critical acclaim and was broadcast worldwide, including PBS Frontline and BBC Storyville. Raising Renee, the third in a trilogy about families just premiered on HBO.

Jeanne’s work includes Eyes On the Prize, films for American Playhouse and her role as an Emmy-nominated series producer of PBS’s Postcards From Buster. Steve’s credits include many award-winning films for television, museums and the Web. He is co-author of The Filmmakers Handbook.

Ascher:  Chico, when you were ten years old, you accidentally shot your sister Paula, which set off a chain of events that revealed secrets of your father’s sexual abuse of your sisters that you hadn’t heard of before.  When you were an adult, you returned to film your sisters and to bring those secrets into the public eye.  In some ways, this is deeply your story. In other ways, you were and you still are an outsider to the gnarled relationships in your family. In some ways, this is Chico’s story and in some ways, he’s an outsider to the relationships in his family.

The scene that we just saw with your aunt captures both of those senses. It’s astonishing when she claims that the abuse of your sisters has nothing to do with you. Can you talk about how being both an insider and an outsider allowed you to tell the story as well as you do? And has the film changed your family’s understanding of what happened?

Colvard:  Where’s Rachel Clark?  I feel like I need my editor up here.  (laughter in audience ) In terms of talking about me as insider and outsider, the reason that I am saying Rachel should be up here is because she probably would be able to tell you better than me how much I struggled with this very issue – of how much of myself to put into the film. I spent years making in and out points anytime I heard my voice or I saw my finger in the frame.  Any part of me in the story, I would take it out.  And I wasn’t even sort of putting it in a bin somewhere, you know, so that I might circle back to it.  I was so certain that this was not about me.

I did that for a couple of reasons; one was, what I told myself back then, is that I didn’t want to make a film where I was using this really troubled experience as some kind of platform to promote myself or to self aggrandize in that way.  I was so concerned about that.  At least that’s what I was telling myself; but I think I was really being a coward.  I was still hiding.  I was hiding behind the camera and I was hiding behind my sister’s story, and continuing to frame the story in this way.

I have my editor, Rachel Clark, to thank for pushing me to insert myself more into the film; but also the people at LEF as well. They turned me down for a grant (laugh). But they didn’t just turn me down and say you can’t have the cash; they turned me down with cause. They said “a lot of the feedback we’re getting from the people that were reviewing the applications is, ‘Where’s your voice?  That this is as much your story as your sisters’.”

So, there’s this insider/ outsider point of view; but it was also about going back and dealing with the family on a more intimate level.  Remaining invisible, left me sort of struggling to get some of the answers to the questions that I had.  But it also gave me a certain access I’m not sure I would’ve had because I was acting invisible. I would set up the camera and disappear often times and things would just unfold. They would continue to operate as if I weren’t there. There was something anthropological about it.

Jordan:  In this scene with your Aunt Eleanor, did something happen to make you stop feeling invisible at any point?

Colvard:  No, not anything that you can see in the film.  But subsequently, there have been a number of family members who have found out about the film, and through them I’ve learned that this is the one scene that really seems to get to them the most. And this surprises me. I don’t know. Rachel, where are you? Did you think that would be the scene that would really get people? It’s consistently the one scene people go to and are really troubled by. And it seems that my family members were equally troubled.

Ascher:  Part of this scene is that everyone else in your family seems to have no trouble forgiving your father and you’re wanting to hold him to account at least a little for what happened. And that ‘s pretty astonishing that they’re as open to him as they are.

Colvard:  Yes, it would require a lot of work for them to hold him accountable.  It would require them having to undo a lot of the relationship they’ve developed and built with him since his crimes came to light.  And I think it’s a lot easier for them to continue to leave me on the margins, if you will, the outsider who doesn’t get how important family is, how important loyalty is. Easier than to actually confront exactly what he did. Also for them to possibly confront what they failed to do.

Clip 2: from Steve Ascher and Jeanne Jordan's So Much So Fast

Colvard: The reason I picked the opening three minutes is because I thought that prologue gets at it so well. Clearly the catalyst for making the film is Jeanne’s mother, who was afflicted with this same disease, ALS, that subsequently took her life. I could’ve picked any section of the film for the question that I have for you, which is that it’s puzzling to me that you, Steve, are narrating the film as opposed to Jeanne. Could you talk about that decision-making process and could you also talk about how the two of you collaborated around developing the script?

Jordan:  First of all, as with all of our films, we always start out thinking it’s not going to be narrated.  I’m sure many of us have had that experience, and then you realize that’s not possible because we know too much and it’s not fair to an audience to not share what you know.  But, I was incapable of talking about my mom’s ALS, and ALS, in general. I mean, it’s such a fearsome experience to deal with something like that.  Like what you talked about earlier, feeling like you would somehow be exploiting it, or crossing some line by capitalizing on the misery. I just couldn’t talk about it in a narrator-ly way.  And that’s what made me really push to have Steve narrate this film. But, even more so, it was the relationship that Steve and Stephen Heywood developed over the course of us making the film. It was so important and so poignant that Stephen Heywood talked to Steve more about what was happening to him than he did anyone else, partially because Steve had the tenderness. Steve was the one to ask questions, because people don’t want to ask people who are dying any questions. As soon as I saw what their dynamic was, I started insisting that Steve wear a microphone because what he was asking Stephen was as important as what Stephen was saying many times.  He was reluctant, but I felt like the relationship most key throughout the making of the film was the relationship between him and Stephen.  And so I felt that his voice should be in the questions and his voice should be filling in the information.  I don’t know if…have you forgiven me?  Yet? (laughter)

Ascher:  Even though they are technically interviews with Jamie and Stephen, for those of you who’ve seen the film, I thought of them more as conversations and as you were saying, these are things that Stephen didn’t talk with anyone about, really, just because they were a family of doers and they were working 24/7 to keep him alive and to do whatever that they could, to raise money, get the foundation going, get his wheelchair fixed. So when he and I would sit down and talk, it was kind of like therapy in some ways.  We could go into places that nobody else was willing to…you know, imagine what would happen if he did die, and how he imagined the future.  My voice became part of those conversations, and so Jeanne was urging that they be part of the narration. Like you, we also struggled with how much we should be in the film.  It’s a kind of hybrid form, where it’s biographical, but it’s also autobiographical, and trying to walk that line.

Jordan:  I also want to say that the reason we even included the part about my mother at the beginning was that we felt very much like we had to earn the right to talk about this.  The struggle this family and Stephen Heywood were going through, they wanted us to make the film because they knew we knew.  In the beginning, I had this image of people thinking it was like a disease of the week, and that we were being vulture-like, and having this voyeuristic experience, which was absolutely not what it was.  What it was, was to try to give people something to see and something to know when they come up against this disease.   So this is why we decided to include the personal bit at the beginning.