More from Julie Mallozzi at Flaherty!

It’s our first big chunk of downtime at the Flaherty Seminar.  We’ve seen some great work so far and started some interesting discussions.

Two discoveries for me are the work of Tan Pin Pin, who makes very authored films “exploring Singapore’s histories, contexts, and limits,” and that of Lillan Schwartz, a lovely woman in her 80s who was a pioneer in computer-generated art.

Pin Pin’s “Invisible City” moves between several subjects who are all passionate about uncovering and preserving aspects of Singapore before its modern present.  Through the humor and tragedy, and the emerging details of the pre-colonial, polyglot past, we are left most of all with a deepened understanding of the human drive to memorialize.

Quebecois filmmaker Caroline Martel presented a work-in-progress of “Wavemakers,” a piece which also assembles a vast amount of detail in service of a higher filmmaking vision.  In this case, it is the colorful history and technique of the Onde Martenot, one of the first electronic musical instruments.  I really appreciated Caroline’s humane search for the “vital impulse” that inspires these engineers, composers, and musicians to find a way to translate sound into music.

Having been put into a dreamy space by Caroline’s film and a live Onde Martenot performance by one of the film’s subjects (Suzanne Binet-Audet), we were truly ready to receive Lillian Schwartz’s beautiful computer-generated films from around 1970.  We watched some of them with ChromaDepth 3D glasses, which Lillian recently discovered have the effect of heightening the depth perception she was aiming to create in the films (having suffered from an eye condition which limited her own depth perception). 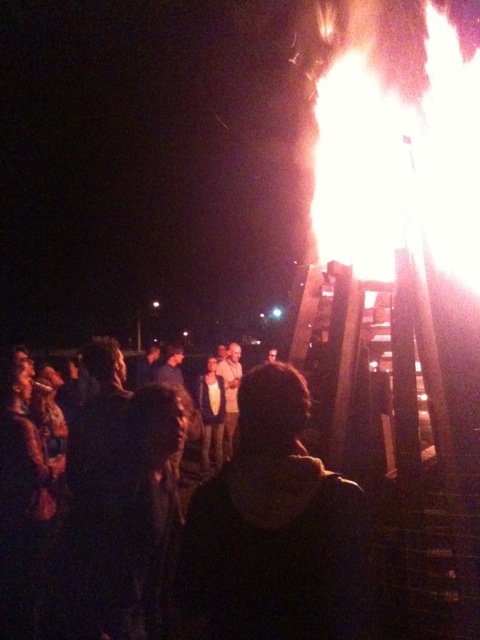 We’ve spent a lot of time in films and discussions, but I can’t say we haven’t also found some diversion – square dancing, Bill’s bar (named after Flaherty regular Bill Sloan), pickup soccer games, and a big bonfire on Monday night.  As fellows we also enjoy daily lunches with the visiting filmmakers, including today with Sam Pollard.  Among other topics, we discussed the distinction between conscious and sub-conscious acts of exclusion in filmmaking.

It’s been a great time so far.  Some of us in the filmmaking contingent, though, are hoping that the remaining program will involve more inventive uses of sound, so that we can more deeply explore this year’s Seminar theme, Sonic Truth.  There has been a preponderance of films about music, or films that contain mostly music and interview in the soundtrack.  This has really limited discussion of sound recording and sound design technique.