A Conversation with Eric Gulliver, Assistant Editor at FRONTLINE

There are many people locally who are working feverishly ( how else) and somewhat below the radar ( no surprise) in all aspects of the media industry. To make visible the range of activity going on in Boston, we’ll be blogging  about some of the people who make up this broad, and very vibrant community, that we’re all a part of.

Recently I took a trip to the WGBH complex in Boston to talk with Eric Gulliver, an assistant editor at FRONTLINE, the public affairs documentary series on PBS that’s been on air for almost 30 years. I wanted to learn a little bit about how they put together the show and what it’s like to work at a place where there’s a shining wall of Emmys adjoining the break room. 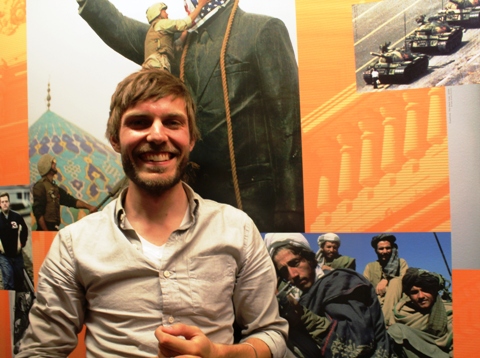 Eric (does he have a black eye? no, that’s a shadow and it’s my fault. NK)

Eric spends his work days, and sometimes his nights (when there’s a looming deadline that requires overtime hours) ingesting and converting media, generating graphics and lower thirds text, and creating all the tapes and other deliverables for each FRONTLINE show. He is adept at wrangling media into complex Avid timelines, and he is confident in the fact that he watches more FRONTLINE than anyone else in the world (“I’d bet money on it”). By checking every minute of footage several times over to watch out for any possible glitches, color errors or spelling mistakes, Eric says he’s gained insight into how the show is structured:

“it’s good that I get to watch FRONTLINE six or seven times – the first three times I’m watching it technically, I’m not even paying attention to what they’re saying a lot of the time, but the fourth time that I see the show, I think, oh, I see, that’s why they brought that character in, he contributed to this part of the story; and then the fifth time, you’re getting the whole structure, and you’re seeing where the mindset was editorially.  It’s really shown me that there’s the ability to craft a story in a short period of time” 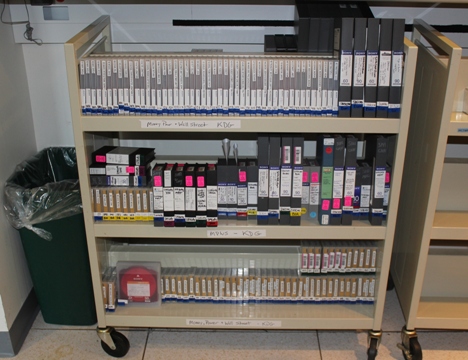 Executive produced by David Fanning, FRONTLINE is known for its journalistic integrity and balance. Independent director/producer teams are commissioned to create shows, bringing the material to OutPost, the post-production wing of FRONTLINE’s headquarters where Eric works, to be finalized and prepared for broadcast. The final tape for each goes to PBS in Washington, DC  – sometimes delivered by hand by a staffer who flies down just in the nick of air-time.

Backups are important, not just for media (I got to see the terabytes- and terabytes- worth of hard drives kept in FRONTLINE’s refridgerated machine room), but also for content, with two primary sources and two interviews to support every claim made in the show. “You back up every line of the script,” Eric explains, “If there’s an insinuation,”there was an alleged abuse” there has to a basis for it, to make sure that it’s fair.”

The show’s editorial team takes balance and fairness very seriously, and are “constantly checking themselves, asking “should we be saying this?”.’ Staff participate in multiple screenings of each show as it’s being prepared for broadcast and undergoing any final editorial changes. As many eyes as possible need to be watching for technical mistakes and also lapses in the content. If a statement or a cut seems dubious or unfair, anyone can bring a concern to the producers’ attention for review. It’s an atmosphere of reasonable, constructive debate.

Eric worked in the past for documentary filmmaker John Gianvito, and he makes his own short films. I’m curious if being immersed in the exacting FRONTLINE environment as an honorary member of the fourth estate has changed how he thinks about the filmmaker’s responsibility in the world of independent documentaries, where there’s more leeway for experimental approaches, point of view and bias. “It’s definitely broadened my understanding of approach,” he says. FRONTLINE’s producers, directors and editors are “very much concerned about the flow of a story and keeping people interested and really editing it down but keeping the spirit of what is being said.” They’re constructing an argument from the footage rather than adhering to a more hands-off observational approach. “I’ve always thought there was utility to both of those approaches, but I see now that it can be very fruitful to be true to what your characters are saying, in a way that’s digestible to people.”